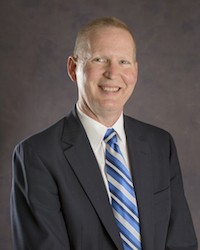 James T. Haadsma has practiced with the law firm since August, 1987. He specializes in representing injured workers in workers’ disability compensation disputes before the Michigan Workers’ Compensation Agency, and in representing injured workers before the Social Security Administration’s Office of Disability Adjudication and Review. Mr. Haadsma also occasionally represents a partially disabled employee in controversies with employers under the Americans with Disabilities Act/Michigan Persons with Disabilities Civil Rights Act. He represents clients from Washtenaw to Berrien Counties, but predominantly in Calhoun County.

Before joining the McCroskey firm in August, 1987, Mr. Haadsma practiced with the Muskegon office of Legal Aid of Western Michigan, between May, 1984, and August, 1987. He then undertook successful Federal court challenges to a City of Muskegon ordinance, and to municipal mis-management of public housing programs, among other impact litigation advocacy. Mr. Haadsma continues to represent workers who otherwise could not afford an attorney by his participation in the Legal Services of South Central Michigan’s pro bono panel program.

Community Involvement
Contact Us
Practice Areas
Client Reviews
★★★★★
"I have been with your firm since 1999, I believe. I have already recommended the firm. Why I would it is because you have great & caring people working for you." Dawn D.
★★★★★
"Excellent service-- you did a great job! I would recommend McCroskey Law. Professional-- always answered questions-- very nice." George M.
★★★★★
"The hospitality was very great. Absolutely, I will recommend McCroskey Law. Because they really work hard for their clients. Please keep up the good work. Thank you so much." Lea J.
View More
Submit a Law Firm Client Review